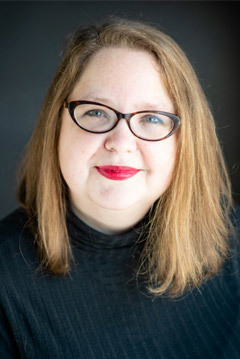 Dr. Mary McCampbell is an associate professor of humanities at Lee University in Cleveland, Tennessee, where she teaches courses on postmodern theory and fiction, film and philosophy, and popular culture. A native Tennessean, she completed a doctorate in literature at the University of Newcastle-upon-Tyne focusing on the relationship between contemporary fiction, late capitalist culture, and the religious impulse.

Her publications span the worlds of literature, film, and popular music, and while in Vancouver, she will be working on a book titled Postmodern Prophetic: The Religious Impulse in Contemporary Fiction. This monograph will focus on post-secular aspects of the novels of Douglas Coupland, Chuck Palahniuk, Dave Eggers, Bret Easton Ellis, and Nick Hornby, authors that occupy a liminal space between the popular sphere and the academy, garnering both cult status and scholarly attention. Her research on this work, a genre often referred to as “blank fiction,” has uncovered a distinctly postmodern prophetic impulse, an interesting interplay between Ricoeur’s “hermeneutics of suspicion” and Brueggemann’s “prophetic imagination.”

Mary’s primary research has been on the themes of epiphany and apocalypse in the work of Canadian author and artist, Douglas Coupland. She was a Scholar-in-Residence at Regent for the winter term of 2018, where she also spent time working in Coupland’s archives (more than 200 boxes) that are housed in UBC’s special collections.

She has been one of the organizers of Calvin College's Festival of Faith and Music since 2009, and she frequently speaks and teaches on the theological significance of popular music, film, and fiction. Mary was the Summer 2014 Writer-in-Residence at L’Abri Fellowship in Greatham, England and periodically lectures at English L’Abri.

Mary McCampbell is Associate Professor of Humanities at Lee University where she teaches contemporary fiction, film and philosophy, and cultural studies. Along with academic publications, she has published in Image Journal, Relevant,Christianity Today, and elsewhere. Her book, Postmodern Prophetic: The Religious Impulse in Contemporary Fiction, is forthcoming.
Return to Faculty List