Regent College is … literally at the entrance of UBC, one of the world’s largest public universities.

Regent College Student Association (RCSA) is on a mission this year to get Regent students out exploring the wide world of UBC together with a new initiative, UBC for Free. So far they’ve deliciously browsed a University farmers’ market, taken a professor-as-interpreter to the Museum of Pacific Earth, and discovered a cavernous basement full of taxidermy.

Find out what’s next and how to get involved in this short interview with Ian Gilbert, VP External of the RCSA.

Tell us a bit about yourself and your role at Regent.

My name's Ian; I'm a student, second year, completing the Master of Arts in Christian Studies. I also have a role on the Student Council as the VP External which is largely responsible for representing Regent to UBC and representing UBC to Regent students.

What is UBC for Free?

UBC for Free is an idea that came about through a conversation [with Diane Stinton and Claire Perini, Dean of Students and Assistant Dean of Students]. It's essentially school excursions highlighting all the free benefits of being affiliated with UBC. Regent College is quite a small building, [but] most students get dropped off at the door on the bus, come into the building, hop straight onto the bus at the front door and go home, not realizing that they're literally at the entrance of UBC, one of the world's largest public universities.

It's super exciting. There're a lot of benefits that we have by being affiliated with UBC: we get free sporting entrance, free entry to the ice rink, to the swimming pool. There are museums. There's ground-breaking research being presented all the time at UBC.

The idea of UBC for Free is every week or every second week we take a group of students to an event that's generally free. It might be to a museum or it might be to the botanical gardens or to a theatre show or a musical. There are like a hundred and one things on every week, so we're not trying to bombard students. It's more to remind students that if you jump on the internet, there'll be something out there happening.

How has it gone so far? Where have you gone and what have the highlights been?

This semester is the first time that we've run it. The first UBC for Free was to the Beaty Biodiversity Museum. It has the largest blue whale on display in Canada. It's enormous. And anyone can look at it for free.

And then you go down to this cavern of hundreds and hundreds of taxidermy creatures. So that was really good…

Yeah it’s kind of like you're in a library of creatures.

Half creepy half fascinating?

So that was the first one that we did. That was good.

We went to the farmers' market. UBC has a farm, a working farm, where they teach farm things, agricultural studies.

And the latest one—we try to do at least one a semester where we go with a professor and try to think theologically about some of this dialogue that we're having with science or medicine. The latest one was to the Museum of Pacific Earth with Professor David Robinson. The museum gave us a brief tour of the museum, and an overview of how they know what they know—the age of the rocks, how they dig fossils, how they think certain parts of the earth were formed. Then we had a discussion with the professor, David Robinson, about how do we think theologically about what we've just heard.

It’s helpful because it's easy to read about like dinosaurs and the age of the earth, but this museum has a life-size, 5-metre-tall, 75 million-year-old dinosaur that's in the entrance, in the foyer. You're standing there looking this enormous creature in the eyes, and you basically have to ask, how do I fit this in with what I just heard in theology? I've just been reading the metaphysics of Genesis; where does this creature fit there? 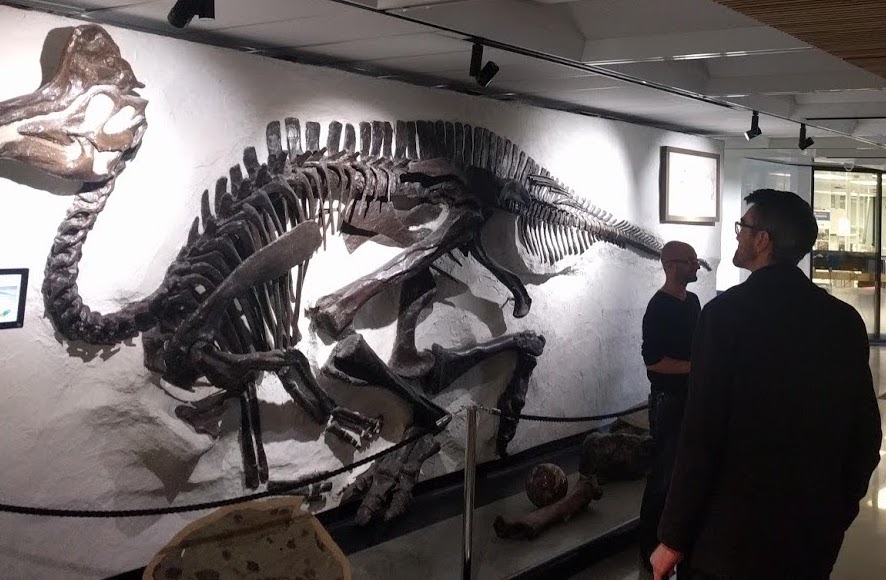 Regent College Sessional Lecturer David Robinson observing a fossil at the Pacific Museum of Earth. Robinson acted as interpreter at the event.

So you do get to go on field trips as a graduate student.

Yeah. It's a field trip, but it's like a five-minute walk. And you can go there anytime. And we have a wide variety of people that are like “I'm free on Friday afternoons. I'll go to that.”

And what's coming up?

We are attending a UBC premier league rugby match on Nov 30—a great chance to see some high level sport. Many people have never seen rugby played before, particularly our American students!

Dec 6 we are heading to the UBC Museum of Anthropology, an incredible building with huge glass windows overlooking the ocean. It houses thousands of exhibits from around the world and a massive collection of First Nations artifacts from the Pacific Northwest.

There are other things. The Chan Centre regularly puts on phenomenal symphony orchestras, which again are really subsidized. They’re like $10, and otherwise you would pay hundreds.

Where can people go to keep track of this?

We advertise through our Facebook page, through posters. Posters come out Mondays for the upcoming Friday excursion. They will also be in the chapel announcements.

What if someone has an idea of something they really want to do?

Please email me at the VP External email, or you can just Facebook message the RCSA if there's something. We have funding. If it's an event that might cost money, we're happy to subsidize it. But almost everything for a registered student is free.

Thanks for catching us up. Enjoy exploring UBC.