De-Mythologizing the Science-Religion Conflict: An Interview with Peter Harrison

The idea of a perennial science-religion conflict is one of the most pervasive myths of modernity.

In this short interview, Dr. Peter Harrison goes back to the nineteenth century to find the origin of the myth that science and theology are fundamentally at conflict.

Peter Harrison will be visiting Regent College from May 13–17 to teach the course “Religion and the Rise of Science.” Professor Harrison is Director of the Institute for Advanced Studies in the Humanities at the University of Queensland, Australia. Author of The Territories of Science and Religion, he is currently working on the "Science and Secularization" project as an Australian Laureate Fellow.

The interview was conducted by David Robinson, Post-Doctoral Fellow in Theology and Science at Regent College. Dr. Robinson’s position is part of the three-year initiative to advance conversations about the relationship of theology and science at the College and beyond, made possible by a generous grant from the John Templeton Foundation.

David Robinson: I would like to begin by asking about the title of your Summer Programs course, “Religion and the Rise of Science,” which we’re eagerly anticipating here at Regent. Why is it important for us to examine religion and science together rather than apart?

Peter Harrison: There’s a long-standing question about why modern science emerges in Western Europe in the seventeenth century. A significant part of the answer is to do with the Christian matrix of ideas within which science first developed. For me, then, the question has always been not whether Christianity influenced the development of science, but how. It turns out that there are a number of ways. First, Christianity provided the motivation for the formal investigation of nature, which was understood as God’s “other book.” Second, Christian ideas provided some of the necessary presuppositions for modern science, most notably, the idea of laws of nature, understood as divine edicts. A third example would be that Christianity provided the values that gave social legitimacy to modern science. This accounts for why science was consolidated and integrated into Western culture in an unprecedented way. In short, the history of modern science cannot be fully understood without an appreciation of the key role played by religion.

In contemporary North America, many people assume that religion and science are in opposition to one another. But you observe that historians of science tend to regard the “conflict myth” as a largely nineteenth-century invention. Could you give us a brief sketch of the origin of this mythology?

The idea of a perennial science-religion conflict is one of the most pervasive myths of modernity. Its origins go back to Enlightenment ideas about human progress, and to thinkers who credited science with being the engine of human advancement. Religion was often relegated to the role of a retrograde force in history. In the nineteenth century, various “histories” were constructed that endeavoured to flesh out these progressivist ideas with putative instances of science-religion conflict. John William Draper’s History of the Conflict between Religion and Science (1875) is one influential example. The history of science, Draper claimed, was simply the history of “two contending powers,” science and religion. Draper and his fellow travellers set about cataloguing supposed instances of these perpetual conflicts, and these have now become mainstays of the conflict myth. Historians of science over the past 30 years have painstakingly debunked this myth, but their message has been very slow to break through at the popular level.

In the course you will be examining how certain scientists such as Galileo and Darwin have been reconstructed as “exemplars of conflict.” As a preview of that discussion, what are a few of the historical facts surrounding Galileo’s trial that help to “de-mythologize” the episode?

The case of Galileo is probably better understood as a conflict within science, in which the Catholic Church backed what in retrospect was the wrong side. It is important to realise that at the time the scientific case for heliocentrism was by no means conclusive, and that there was quite compelling evidence against it— lack of observable stellar parallax is one example. Neither was this censorial intervention into scientific matters by the Catholic Church the way it usually operated. The Catholic Church was the predominant sponsor of astronomical research for centuries before and after Galileo. None of this is to say that the Church was entirely blameless in this episode, but it is true, nonetheless, that the Galileo affair was not primarily about science and religion, and neither was it emblematic of the Church’s attitude to science.

With Darwin, things are a little more complicated because important religious commitments were more central to the discussion. But again, we need to remind ourselves that the evidence for natural selection was, at the time, contested on scientific grounds, and that Darwin had significant supporters in the religious establishment.

Related to the issue of mythology, you have commented that “Christianity and science have resisted the telling of their histories.” What would be one of the main motivations behind such resistance, given that both religion and science are truth-seeking endeavours?

Generally, the issue is to do with how truth can emerge from contingent historical events. In the case of science, we know the important role played by social factors in the success of scientific theories. We also know that the history of science is a graveyard of discarded theories that once enjoyed universal support. Taking a long historical view leads us to wonder about the status of the present scientific consensus, given the likelihood that much that we hold to be true now is likely to be superseded. (There is also the issue of whether the sciences seek truth or utility—and these are not same—but that is a question for another occasion.)

The case of religion is parallel in certain respects, given the historical contingencies around, for example, the formation of the canon and the conciliar determinations that gave rise to the ecumenical creeds. In this case, however, it is possible to appeal to the providential guidance of history. This latter option is not one that is now typically invoked in the context of the history of science (although it was in the early modern period).

Those of us who are trying to challenge the “conflict myth” often speak of a “harmony,” or at least a dialogue, between science and religion. You have warned, though, that such advocacy “has the potential to reinforce the very conditions that make conflict possible.” Could you elaborate on this statement?

The conflict model generally assumes that science and religion compete for the same explanatory territory. I think this is mistaken. By the same token, some accounts of dialogue similarly construct “religion” in a way that emphasizes or magnifies the points of contact between the sciences and religion. This again leads to a stress on what science and religion have in common, sometimes at the cost of losing sight of their significant differences and distinctive features. A related worry is that harmony can be achieved simply by making concessions on one side in areas where there is tension. That side is almost invariably religion. It might be better to learn to live with some level of tension, particularly, as I’ve already observed, in view of the fact that science is by nature a changing enterprise.

Your evening public lecture here is entitled “The Shifting Territories of Science and Religion,” and you have elsewhere spoken of the “borders” or “boundaries” of science and religion. Could you briefly fill out this geopolitical analogy and speak to how it might help us, as scientists and as people of faith, to find our bearings?

Just as national borders change over time, so too with the boundaries of the enterprises that we refer to as “science” and “religion.” This is relevant to the issue of conflict. Israel’s present contentious relations with some of its neighbours, for example, can be attributed partly to the way in which the boundaries of the modern state of Israel were created, and to how they have changed over time. By analogy, some conflicts between science and religion are the result of the way in which the boundaries of our modern conceptions of “science” and “religion” came into existence and developed over time. Running with this analogy, if we give consideration to re-drawing those boundaries—perhaps restoring them to where they lay in the past—what we think of as inevitable conflicts might be ameliorated.

While at Regent you will also be taking part in a faculty roundtable with Bruce Hindmarsh and Dennis Danielson on the topic of “The Bible and the Emergence of Modern Science.” You have pointed out that “the kind of literalist mentality characteristic of early modern Protestants gave rise to a world-view that provided a congenial environment for the flourishing of the natural sciences.” What can we in North America, for whom “literal interpretation” often suggests a fundamentalist opposition to science, learn from our early modern forebears?

I’d say first that I’m not sure that fundamentalist Christians are opposed to science per se. Rather, they object to particular features of modern science, evolution by natural selection being the obvious case. But Darwinism is often regarded by them as not genuine science. If anything, I wonder if fundamentalists place too great a store in science, conflating a Christian doctrine of creation with a mechanical account of the origins of the world: hence, scientific creationism. As for the lessons of history, perhaps there is more to be learned from our patristic and medieval forebears who had a more expansive and richer conception of how to read both Scripture and the natural world. 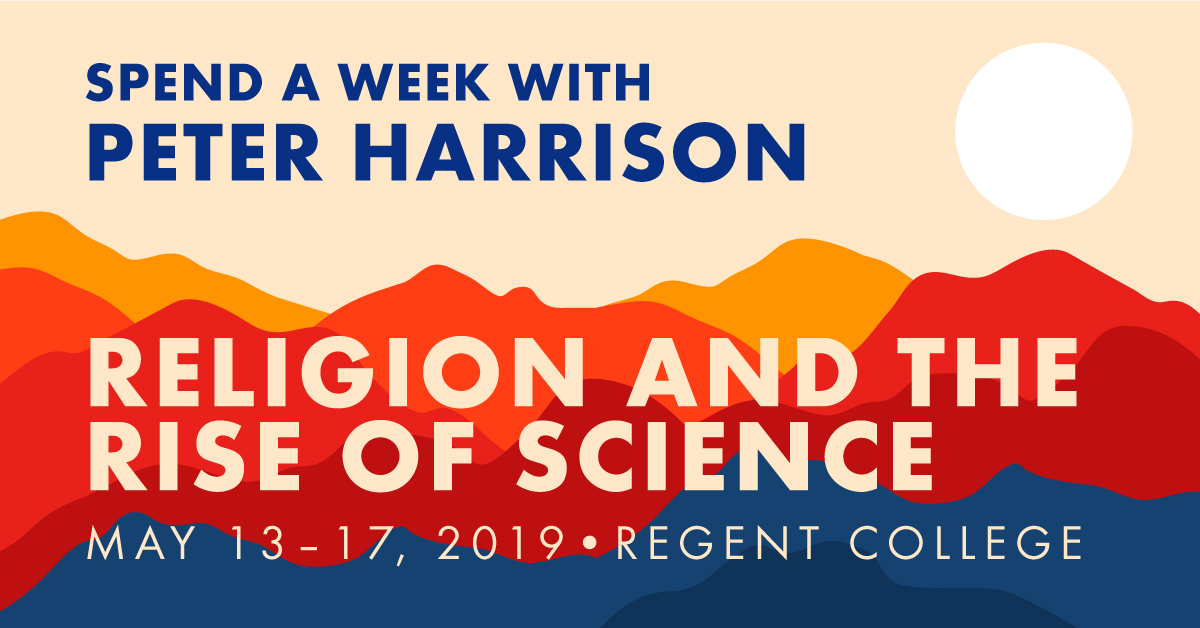