Regent College is pleased to announce the appointment of two new professors emeriti: Carl E. Armerding and W. Ward Gasque. Ward and Carl's manifold contributions to Regent were warmly remembered and celebrated in an address by President Jeffrey Greenman at the 47th Convocation of Regent College. Both Carl and Ward were present at the ceremony, held on April 28 at the Chan Centre. President Greenman's remarks are set out in full below.

As those you from Edmonton know, the NHL playoffs are happening. That’s a fact that some of you here in Vancouver might have missed. In fact, the Oilers are playing—right now.

Speaking of hockey, the Hockey Hall of Fame has two categories of inductees—builders and players. The players are, of course, the best on-ice performers ever. The builders are people who have built the sport, and grown it, by extending its reach and success—owners, general managers, coaches, and others.

Well, Regent doesn’t have a Hall of Fame. The closest thing to it is our category of Professor Emeritus.

Tonight we recognize two people for their contributions to Regent College—and if we have the categories of builders and on-ice players in mind, these two men would qualify for Regent’s Hall of Fame in both categories.

It is no exaggeration to say that we would not be here tonight, and actually there would not be some 5,000 graduates and 17,000 alumni of Regent College, without Carl Armerding and Ward Gasque.

It is fitting that tonight we recognize these two lifelong friends and colleagues, here tonight, at the same time, in the same place.

Once upon a time, actually back in the mid-1960’s, Regent College—before it even had a name—was just an audacious dream in the minds of a small group of people.

Back then, there were two young American Plymouth Brethren Biblical scholars—Carl and Ward. Somehow, by the grace of God and mysterious work of God’s Spirit, they were drawn into the early stages of the project that would become Regent College. In due course, they would become two of the first four founding faculty members of the College, alongside Jim Houston and WJ Martin. 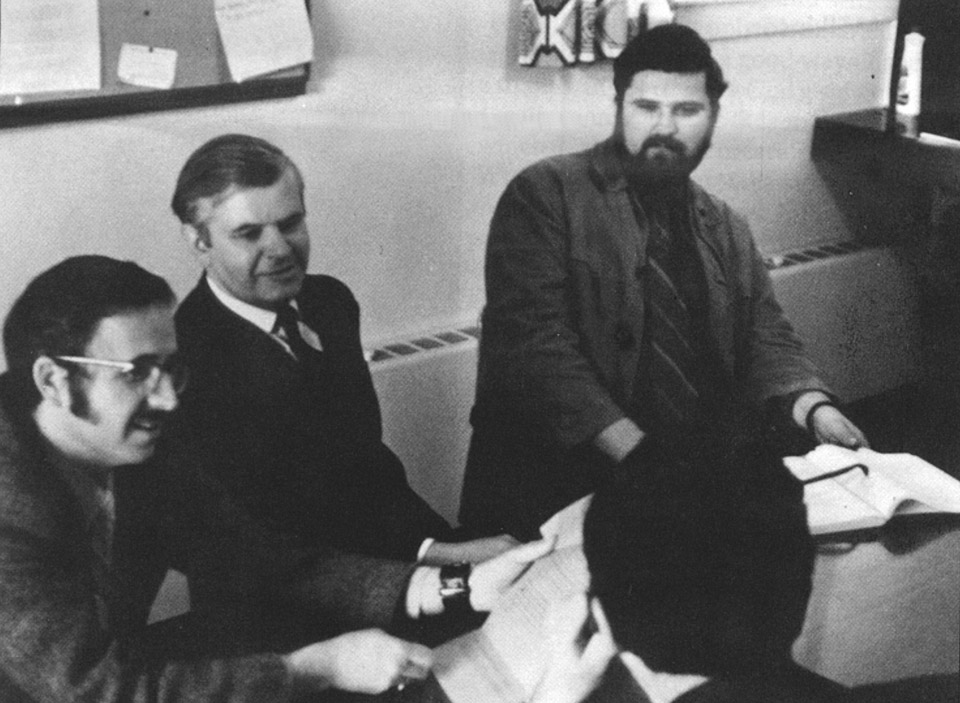 If something needed to be done, especially in the first two growing decades of the College’s life, Carl and Ward were doing it—teaching classes, mentoring students, designing curriculum, administering everything in sight, promoting the College, speaking in countless churches, recruiting students, and probably also sweeping the floors and changing the lightbulbs. Year after year they served with great dedication, great vision, and great sacrifice. Along the way, they’ve held various senior leadership roles at Regent: Carl served as Principal-President between 1978-88, and Ward served as Vice Principal.

With them came two remarkable women, their wives: Betsy Armerding and Laurel Gasque, each of whom has made their own Hall-of-Fame worthy contribution to the development of the College. Betsy and Laurel, we salute you tonight, for anyone who has been around Regent over these almost 50 years knows that you have loved this place and this ministry just as much as your husbands have; that you, too, have sacrificed enormously for Regent’s ministry; and that these two gentlemen could never have done what they have done for Regent and in the Lord’s service around the world without your support, encouragement, deep partnership, and countless prayers.

So Carl and Ward would be Regent Hall-of-Fame builders, for their work has made Regent possible in countless ways. But the designation of Professor Emeritus is being awarded also on account of their outstanding “on-ice, player” performance as faculty doing the work of scholars, teachers, and mentors. 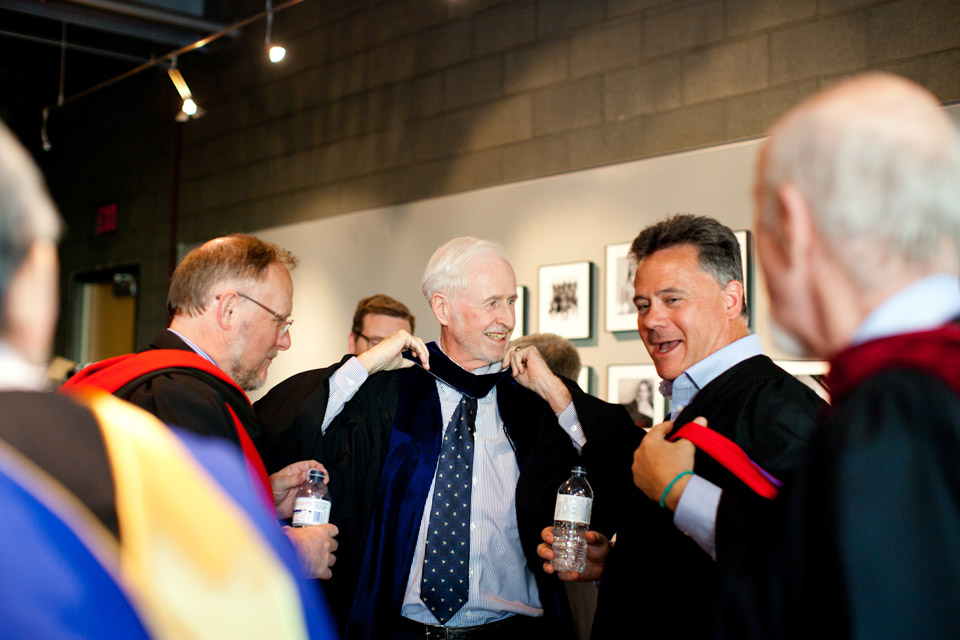 Carl in the gowning room prior to the 2017 Regent College convocation ceremony.

Each has been a pioneer in the growing development of evangelical biblical scholarship. Today’s generation of scholars, including our current faculty, have recognition, legitimacy, platforms for contribution, publication venues, and access to rich resources of study that were not available to Carl and Ward’s generation. Both Carl and Ward, each in their own way, helped to shape the future of evangelical biblical scholarship. Each modeled in their writings, their editorial work, and in their classroom teaching a critical engagement with the biblical text, and the use of scholarly tools of investigation, deployed from the standpoint of a high view of Scripture and firm confidence in the authority of God’s written word.

Carl taught Old Testament at Regent: his textbook, Old Testament and Criticism, has been widely used, and he has edited various works in biblical studies as well as authored many articles. In 1991, he and Betsy set off to serve as a missionaries in service of the church in Eastern Europe, in the era of open doors and new opportunities after the fall of the Berlin wall. He served as Academic Director of Schloss Mittersill Study Centre in beautiful Mittersill, Austria, an innovative venture which offered graduate level education. He was also Senior Fellow at the Oxford Centre for Mission Studies, mentoring scholars from around the world in their PhD work.

Ward taught New Testament at Regent; in fact, he became the first E. Marshall Sheppard Professor of Biblical Studies. From his early research on the interpretation of the Book of Acts, a seminal work that has shaped the field, Ward taught across the New Testament corpus, and wrote dozens of scholarly and even more popular articles. He has been a prolific—better, tireless—editor of major reference works and commentaries in his field. Ward’s flair for innovation led him to become the founding President of New College Berkeley. He also served as Provost at Eastern University, Academic Dean at Tyndale Seminary, President of the Pacific Association for Theological Studies, and pastor at several churches until his retirement from active ministry.

Carl, for your distinguished service as a founding faculty member of Regent College, and as a scholar, teacher, and mentor, I am pleased to recognize you as Professor Emeritus of Old Testament. Congratulations! 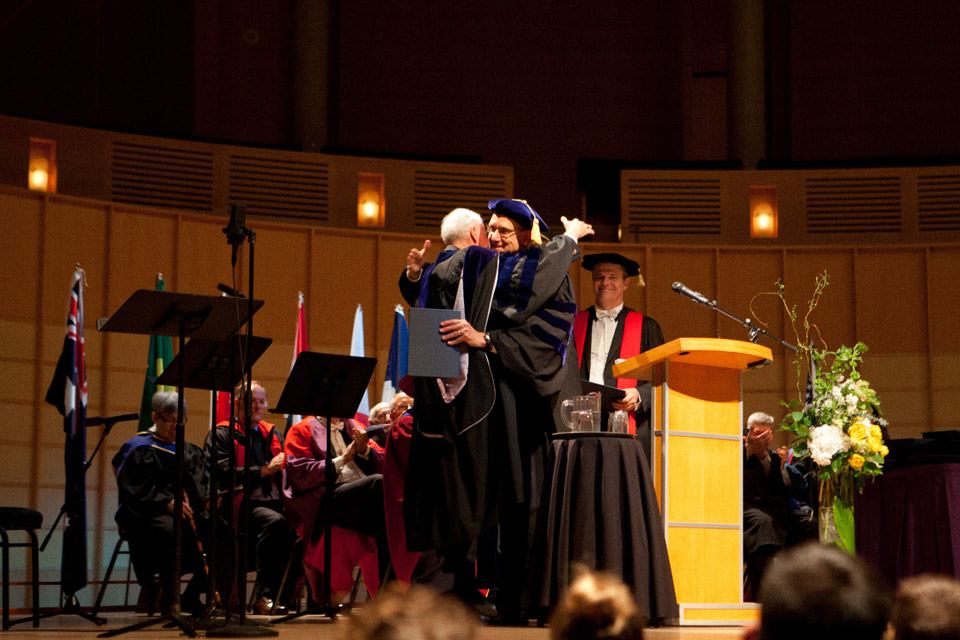 Ward, for your distinguished service as a founding faculty member of Regent College, and as a Christian scholar, teacher, and mentor, I am pleased to recognize you as Professor Emeritus of New Testament. Congratulations! 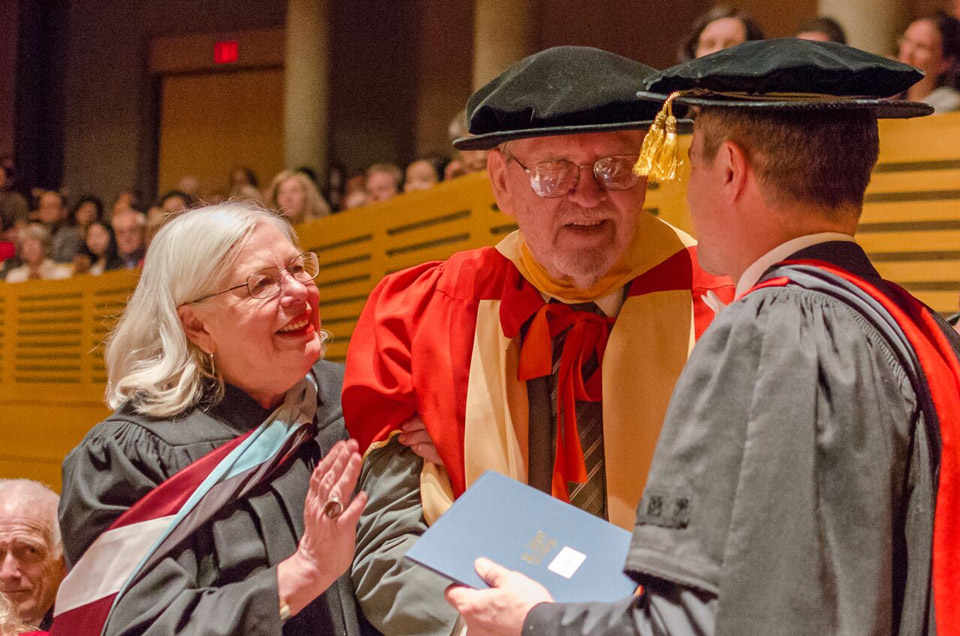