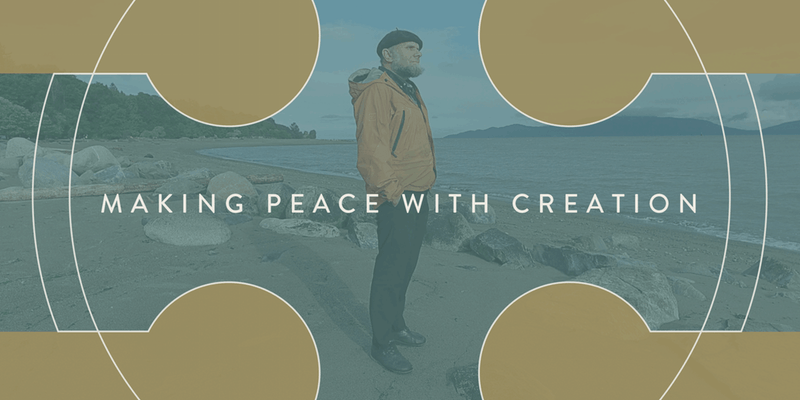 For all [Loren's] realism in facing up to the problems of what we are doing to the ocean... you always get the sense that God’s still in business.

In this interview, Iwan Russell-Jones, director of the recently released documentary, Making Peace with Creation, shares about the newly released study guide for the film. The guide will provide resources for individuals and groups to go deeper with the theological themes and the poetry that are featured in the film.

Iwan, thanks for coming in! I hear that you have a study guide to go with your new film. Tell me about that.

Yes. Hot off the press. We’ve been working on it for a while, actually, and we’ve now got it ready. It was always the intention to have some text from Loren’s poems as well as chunks of script, questions, and biblical passages so that people—churches, discussion groups—could pick up on some of the meaty themes of the film. So that’s ready and the copies of the DVD that we sell from now on will have that in there.

Who do you think are the people who will most enjoy this study guide?

Anybody who’s interested in the film and wants to discuss it with other people—follow up some of the themes. You know, there’s some deep theology in there, as well as poetry that needs to be savoured. If people want to enjoy the poetry at that level, the text will be in this little guide.

One of the themes that’s explored in the guide is the relationship between creation and redemption. I think people often hold these things apart; Loren brings them together, particularly through that image of the Celtic cross that’s in the film. The Celtic cross both has the cross as a focal point, but encompassed within it is the globe—the circle of creation. So I think there are resources in there to think about that link biblically and theologically.

What has been exciting to you about the release of the film?

It’s really exciting to see it all come together. You know, obviously any project like this, you kind of wonder how is it all going to work out. But seeing Loren actually bringing themes together in the film is very exciting—particularly the themes of creation and creation care, and how much that is not just an optional extra—that it is part and parcel of our responsibility as human beings made like God. Loren encourages us to see that in the context of our commitment to Christ, and to see our whole pattern of life being one of care for God, love for God, love for neighbour, and care for creation.

And then the artistic side of things—also not just something that’s an add-on—that’s a central part of the film, certainly a central part of Loren’s vision, and mine too. It’s the vision that the arts and creativity are very much related to our being creatures made by God, and, you know, able to make things that are lovely, beautiful, and challenging that reflect the core of our existence.

I know you’ve been interacting with students all through this project and in your courses prior to this. Has this interaction shaped the study guide at all?

Yeah, well it’s a student, a very good designer—Steph Martens—who actually designed the booklet. It’s been great at every point in the creative process to bring students in. My intention right from the beginning was to involve students in making the film, researching it, crewing it, editing it—for them to be as involved as possible—and they were able to do that. I got a great group of students. In fact, probably the impetus for doing the film in the first place actually came from students who said to me, “If you’re going to do a film, I’d love to be involved.” Enough of them who I knew had experience in film came and said that to me, and I thought yeah; we’ve got a group here; we could do something. Aaron Krogman, Jessica Van Der Wyngaard, Dave Siverns, Joshua Harris, Dafydd Russell-Jones, Tim Opperman. You know it was a solid group who said right from the beginning, count me in. They were involved in it all the way through actually.

Sell it! I want to sell it! [Laughs] You know, I want to get it out there in various ways. I mean, the frustrating part is how do we get this out to people. Because I’ve got the feeling that there’s a world market for this, not in the sense of big cinema releases and everything, but I think Christians all over the world, people all over the world, are thinking about the future of this planet and our responsibility. I think they’re going to find in this film both a real challenge and a strong sense of hope. Loren, for all his realism in facing up to the problems of what we are doing to the ocean—that’s a strong part of the film—you always get the sense that God’s still in business. As Loren says, God is a God of resurrection. So there’s hope.

Thank you so much!