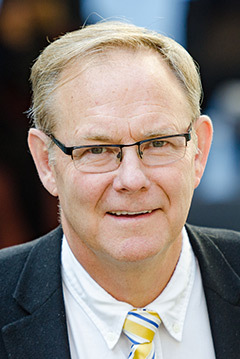 Ross Hastings will be on sabbatical in the Winter 2024 term.

Ross's most recent work is Theological Ethics: The Church's Integrity in Contemporary Context (Grand Rapids: Zondervan Acad., 2021). Other published works include Total Atonement: Trinitarian Participation in the Reconciliation of Humanity and Creation (Fortress Academic/Lexington, 2019), Missional God, Missional Church: Hope for Re-evangelizing the West (IVP, 2012), Jonathan Edwards and the Life of God: Toward an Evangelical Theology of Participation (Fortress Press, 2015), Where Do Broken Hearts Go? A Theology and Psychology of Grief (Cascade, 2016), and Echoes of Coinherence: Trinitarian Theology and Science Together (Eugene, OR.: Cascade, 2017). He currently serves as the Sangwoo Youtong Chee Professor of Theology at Regent College.

After his undergraduate degree in chemistry at the University of the Witwatersrand in Johannesburg, Ross taught high school chemistry at St. Martin’s School in Rosettenville, Johannesburg, coaching rugby, cricket and tennis, and later he taught at Grainger Grammar School in Newcastle upon Tyne, where he was also the school headmaster. His PhD in organometallic chemistry at Queens “Chemistry of Ruthenium Carbonyls: Carbon Oxide Hydrogenation by Catalysts derived from Ruthenium Carbonyls”, 1987. He was a sessional lecturer in chemistry at Trinity Western University for one year also during his first pastorate at Westminster Chapel in Burnaby, BC. He served as a lead pastor also at Westview Bible Church in Montreal, and Peace Portal Alliance Church in south Surrey, BC, before taking a teaching position at Regent College. He teaches courses in systematic and historical theology as well as courses in pastoral theology.

Ross lost his first wife Sharon to cancer in 2008 after 27 years of marriage. In 2011 he married Tammy Carrillo, who also lost her husband to cancer in 2008. Together they have five children. He enjoys sport—especially rugby, cricket, soccer, tennis, squash and flyfishing—as well as a wide variety of music.