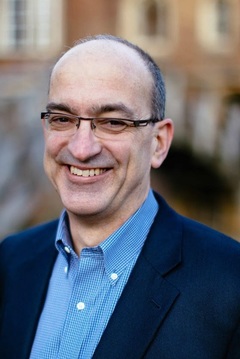 Dr. George Guthrie is Professor of New Testament at Regent College and a highly sought-after lecturer, who has taught across North America, as well as in East Asia, the United Kingdom, Germany, South Africa, and Israel. Before coming to Regent in 2018, he taught for twenty-eight years at Union University in Jackson, Tennessee, where he served as the Benjamin W. Perry Professor of Bible and Fellow in the Ryan Center for Biblical Studies.

George holds both a PhD and MDiv from Southwestern Baptist Theological Seminary, and a ThM from Trinity Evangelical Divinity School. A recognized authority on the New Testament book of Hebrews, George's doctoral research was published as The Structure of Hebrews: A Text-Linguistic Analysis in the series Supplements to Novum Testamentum (Leiden/New York: E.J. Brill, 1994). He has published commentaries on Hebrews (Zondervan, 1998; 2002, 2007), James (Zondervan, 2006), and 2 Corinthians (Baker, 2015), as well as numerous articles, book chapters, and book reviews. George has also worked as a consultant on the ESV, CSV, NLT, and HCSB translations.

George has a passion for equipping church leaders and laypeople to read and live the Bible more effectively. To that end he has published a number of works designed to help the church better understand and apply Scripture, including Reader’s Guide to the Bible (LifeWay, 2011), Reading God’s Story: A Chronological Daily Bible (Broadman & Holman, 2011), Read the Bible for Life: Your Guide to Understanding and Living God’s Word (Broadman & Holman, 2011), and CSB Day-by-Day Chronological Bible (Holman, 2018).

George and his wife Pat love being a part of the Regent community and living in British Columbia. They understand their calling to the Regent as oriented to teaching, mentoring, and hospitality, along with a bit of gardening and fly fishing. They have two grown children, Joshua and Anna, who live in Tennessee.