"God gave us our songs, our dances, our culture, our ways, our values—and it’s good. Being native is good." 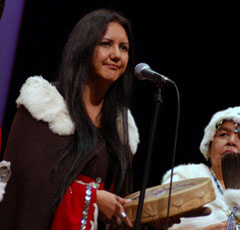 Regent College is excited to announce that “Be Fearless”, a video of alumna Cheryl Bear, has been selected as one of the 29 films presented at the Fifth Annual Missions Fest Vancouver Film Festival January 24-26, 2014. The film screens in the First Nations Focus Short Film Showcase at 11:00 am on Saturday, January 25.

The video is narrated by Cheryl Bear Barnetson who graduated from Regent College with a Master of Divinity degree in 2004. She has been living and working amongst the First Nations in British Columbia and around North America. In the film, Cheryl shares their calling as a family to “retell the story of Jesus in a native way.”

“One of the main things I want to tell native people is you are made in the image of God. . . .God gave us our language; God gave us our songs, our dances, our culture, our ways, our values—and it’s good. Being native is good.”

The screening will take place in Ballroom B at the Vancouver Convention Centre (999 Canada Place) at 11 am on Saturday, January 25.

The video was produced by Domain7 and directed by Trevor Meier, and is featured on Regent College’s home page. You can watch the video here.

Find out more about the Film Festival at missionsfestvancouver.ca/film-festival