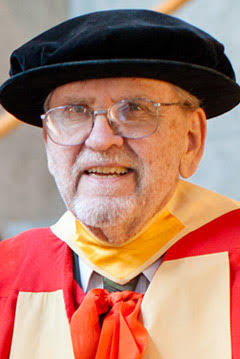 Dr. W. Ward Gasque was one of the founding members of Regent College. He was the College's first Registrar, the unofficial Dean of Regent's very first summer school, and Professor of New Testament from the College’s founding to 1986. In 1986, he was appointed the E. Marshall Sheppard Professor in Biblical Studies, a position he maintained until 1990. He was also the founding president (1979–1982) of New College Berkeley in Berkeley, California, and later served as Provost, Dean of Graduate Studies, and Professor of Biblical Studies at Eastern University, St. Davids, Pennsylvania (1990–1995). Ward returned to Canada for a short time after being appointed Vice President and Dean of Tyndale Seminary, Toronto, Ontario (1995–1997), and then moved back to the west coast to take on a position as President of Pacific Association for Theological Studies, Seattle, Washington (1998–2006). He was also a Fellow of The Oxford Centre for Missions Studies (1990–Present).

Ward’s work at both the scholarly and popular levels reached far and wide. He was Vice-President (1971–1972), President (1972–1973), and Executive Secretary (1976–1979) for the Society of Biblical Literature, Pacific Northwest Region. He served as editor for New International Bible Commentary (1989–1992), and contributed articles to Biographical Dictionary of Evangelicals, Historical Handbook of Major Biblical Interpreters, The Anchor Bible Dictionary, New Dictionary of Theology, The International Standard Bible Encyclopedia, and many more. His publications include A History of the Interpretation of the Acts of the Apostles (2000) and Sir William M. Ramsay: Archaeologist and New Testament Scholar (1966). Ward was also Editor-at-large for Christianity Today (1971–1979) and the Managing, Associate, then Book Review Editor of CRUX (1979–1986).

Known for his deep commitment and passion for the ministry and mission of the church, Ward also served as the English Pastor (2006–2011) and Pastor for Education and Outreach (2011–2013) for Richmond Chinese Alliance Church. Many of his articles reflected this commitment, along with celebrating his Brethren heritage and the ministry of laity and women in the church.
Return to Faculty List