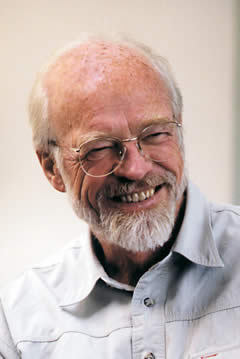 Eugene passed away on Monday, October 22, 2018. He was survived by his three children, nine grandchildren, and his wife Jan, who played a vital part in the Regent community during their time in Vancouver. Jan passed away on May 10, 2019.

From 1993 to 1998, Eugene Peterson served as the James M. Houston Professor of Spiritual Theology at Regent College. In addition to being a poet, author, and scholar, Dr. Peterson was an ordained minister in the Presbyterian Church (USA). He was the founder of Christ Our King Presbyterian Church in Maryland, where he was the pastor for twenty-nine years. Dr. Peterson also served as an Assistant Professor at the New York Theological Seminary. He wrote numerous books including The Pastor: A Memoir, The Jesus Way, Practice Resurrection, Leap Over a Wall, A Long Obedience in the Same Direction, Working the Angles, and Reversed Thunder. He was best known for developing a paraphrase of the Bible called The Message.