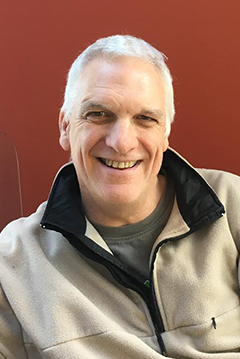 Dr. David “Monty” Montgomery graduated from Regent College with an MDiv in 1995. He also has a BA (Hons) in Engish Literature and Music, from Stirling in Scotland, and a DMin from Covenant Theological Seminary, St.Louis.

He is currently Associate for Bible Teaching and Pioneering for IFES Europe. Before that he was General Secretary of the Irish IFES Movement, CUI. He has taught for IFES groups internationally and was a Presbyterian pastor in Irelandfor 18 years before returning to student ministry. While at Regent, he specialised in Preaching and in Old Testament, TA’ing for Bruce Waltke.

He has published a book on worship, contributed to Bruce’s Festschrift on Wisdom Literature, as well as published articles on reconciliation, childlessness, hymnology, forgiveness and a Christian approach to sport; the last two appearing in Paul Stevens’ and Robert Banks’ Complete Book of Everyday Christianity. He helped organise the Irish Preachers’ Conference for several years and has taught Preaching and Wisdom Literature at the Irish Bible Institute in Dublin, and Celtic Christianity and Christian Doctrine for Taylor University, Indiana.

His doctoral thesis was on bivocational church planting in Ireland. He is married to Gwen, who served on reception at Regent in 1994-5, who assists in his ministry with IFES Europe and is a professional declutterer. He enjoys crime fiction, cycling and the poetic football of Manchester City FC. He blogs at https://citizenofnomeancity.wordpress.com.