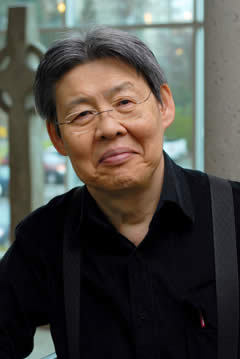 Edwin Hui passed away on November 17, 2020. He is survived by his wife, Winnie, three children, and two grandchildren. You can read our tribute to Dr. Hui here or watch his memorial tribute video below.

Before coming to Regent College in 1990, Edwin Hui worked as a clinician/scientist for ten years and held the position of Vice Chief-of-Staff of Lakewood Hospital in Los Angeles. Between 2003 and 2011, he was seconded to the University of Hong Kong Faculty of Medicine as Professor of Medical Ethics and a consultant in Clinical Ethics of the Hong Kong Hospital Authority. Edwin lectured regularly in China and was a visiting or honorary professor at Peking, Fudan, Wuhan, Sichuan, Hong Kong, and Zhongshan Universities.

Edwin Hui is the founding Editor-in-Chief of the Regent Theological Review, which has been publishing two volumes each year in China since 2004. He wrote or edited ten books and published over seventy articles in prestigious peer-reviewed journals including Medicine and Philosophy, Clinical Ethics, Bioethics, Prenatal Diagnosis, New Genetics & Society. He also authored over sixteen invited book chapters. Before Edwin passed away, he was working on a book on clinical ethics and the translation of a series of Puritan writings.

To honour Edwin's life and work friends and colleagues at Regent College and throughout China paid tribute to Edwin in a memorial tribute video below. Some highlights from these speeches include:

I still remember when he first visited PKU. It was simply written “Xu Zhi-Wei, MD” on his business card. That has remained the title I have called him, because in my mind that has always been his life-time career—a doctor dedicated to healing others.

We have lost a good mentor and benevolent friend. Dr. Hui played a magnificent role in my academic career. I have worked hard in Christian studies ever since meeting him. [...] His work alone is like a spring for me.

If you wish to follow the Mandarin speeches in Edwin's memorial video with an English translation, you can access English transcripts here.