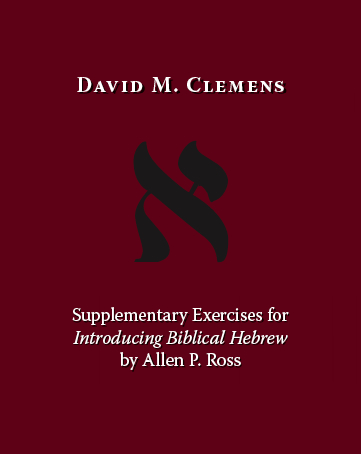 Chapters 1–6 deal progressively with the introductory issues of writing and pronouncing Hebrew, with practice based upon Genesis 1–2. Three types of exercise accompany the study of vocabulary, morphology and syntax: parsing of isolated forms, with emphasis upon the verb (chapters 10–41); two sections of sentences composed in Hebrew, the first focused upon the material of the current chapter and the second containing longer sentences drawn from all the material encountered up to that point (chapters 3–41, with isolated phrases initially); and three sections of passages drawn directly from the Hebrew Bible (chapters 9–41)—isolated verses containing salient features of the grammar studied at that point, longer prose passages (Gen 1:1–2:4, 22:1–19, Deut 8–11, Ruth 1–4, Gen 37:12–36), and short poetic passages from the Psalms (Ps 1, 121, 133, 100, 103, 19, 113, 27, 91, 34, 8). Unfamiliar forms and syntax in the OT passages are footnoted, making it possible to read them without recourse to additional language tools.

DAVID CLEMENS is a biblical language scholar.  He completed his PhD in Northwest Semitic Philology at the University of Chicago. From 2001 to 2016 he was a member of the Regent College faculty.