You are warmly invited to attend the 2017 Laing Lectures, featuring renowned novelist and essayist Marilynne Robinson.

This three-part series is entitled "Considering the Theological Virtues." On February 8, Dr. Robinson will address the virtue of faith. On February 9, she will speak on the subject of hope. And on February 10, she will conclude with a consideration of that greatest of all virtues, love. We hope you will join us for what is sure to be a rich, profound, and evocative series.

All lectures will take place from 7:30 to 9:30 pm at the Frederic Wood Theatre at the University of British Columbia. Tickets to this event are free of charge but must be reserved in advance. 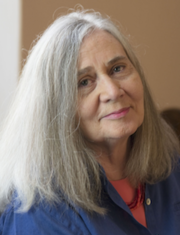 Marilynne Robinson is the recipient of a 2012 National Humanities Medal, awarded by President Barack Obama, for “her grace and intelligence in writing.” In 2013 she was awarded South Korea’s Pak Kyong-ni Prize for her contribution to international literature. She is the author of Lila, a finalist for the National Book Award and the National Book Critics Circle Award; Gilead, winner of the 2005 Pulitzer Prize for Fiction and the National Book Critics Circle Award; and Home, winner of the Orange Prize and the Los Angeles Times Book Prize, and a finalist for the National Book Award. Her first novel, Housekeeping, won the Hemingway Foundation/PEN Award. Robinson’s nonfiction books include The Givenness of Things, When I Was a Child I Read Books, Absence of Mind, The Death of Adam, and Mother Country, which was nominated for a National Book Award. She lives in Iowa City where she taught at the University of Iowa Writers’ Workshop for twenty-five years.

Chad Wriglesworth is an expert in the relationships between American literature, environment, and religion. In addition to master’s degrees from both Regent College and Portland State University, he recently finished a Ph.D. in twentieth-century American literature with an emphasis in religious thought and environmental humanities. Wriglesworth is a prominent interpreter of Robinson’s work, having published the book chapter, “Becoming a Creature of Artful Existence: Theological Perception and Ecological Design in Marilynne Robinson’s Gilead.” Other key publications include work on Wendell Berry, Raymond Carver, and Theodore Winthrop. Wriglesworth has been selected for an excellence in teaching award both at the University of Iowa and St. Jerome’s. Wriglesworth’s current project is a book titled Geographies of Reclamation: Writing and Water in the Columbia River Basin. In his free time, he enjoys hiking and spending time with his family.


About the Laing Lectures

The Laing Lectures began at Regent College in 1999 in cooperation with Roger and Carol Laing and in honour of their father, William John Laing. The purpose of the lectures is to encourage persons recognized for scholarship, wisdom, and creativity to undertake serious thought and original writing on an issue of significance for the Christian church and to promote the sharing of such thoughts through a series of public lectures. The material presented by Laing Lecturers is intended to move beyond an analysis of historic and current concerns to provide proposals for alternative action for the Christian church. In doing so, lecturers will be invited to explore in an interdisciplinary way the relationship between Christianity and culture, and to suggest ways in which that relationship might lead to greater flourishing of the church, the larger human household, and the whole community of creation.

This event is sold out. Tickets will be released to those on the waitlist as they become available.