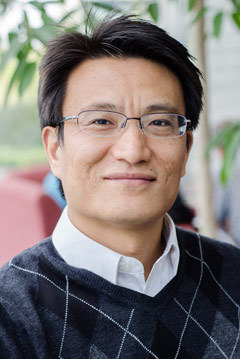 Dr. Yonghua Ge joined Regent College in August 2015 as Post-Doctoral Fellow in Theology for the period 2015-2018.

Before coming to Regent, Yonghua was engaged in a postdoctoral research project on Christian theology in relation to Chinese philosophy at Jesus College and the Faraday Institute for Science and Religion at Cambridge University in England.

A native of China, Yonghua studied physics as an undergraduate at Fudan University and began graduate work in physics at the University of Toledo in the United States. He worked as a teacher of science and English before enrolling as a student at Regent College. In 2011, he graduated from Regent with a Master of Christian Studies degree, writing a thesis on creatio ex nihilo and Thomas Aquinas under Professors John G. Stackhouse and Loren Wilkinson. After earning the MPhil degree at Cambridge University, he continued this line of research on the doctrine of creation in a PhD thesis supervised by Professor Janet Martin Soskice (who is also a graduate of Regent College). Completed in January 2015, Yonghua's dissertation was titled “The Many and the One: The Metaphysics of Participation in Connection to creatio ex nihilo in Augustine and Aquinas.”

Along with researching the doctrine of creation and its relation to medieval theology and ancient Chinese philosophy, Yonghua desires to strengthen the bridge between Christian and Chinese scholarship.

Yonghua has taught general sciences, physics, and mathematics in China, Thailand, and the US. He has published articles in (or has articles accepted by) leading academic journals such as Philosophy East and West, Sino-Christian Studies, Tyndale Bulletin, The Heythrop Journal, Chinese Social Studies Today, and the Regent Review of Christian Thought. He is currently working on publishing his doctoral dissertation in both English and Mandarin.