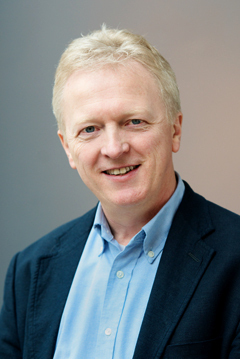 Iwan Russell-Jones joined the faculty at Regent College in 2011 after a long career in broadcasting. On January 26, 2013, he became the first incumbent of the newly formed Eugene and Jan Peterson Chair in Theology and the Arts.

Iwan has over 25 years of experience as a producer and director for the BBC, in both television and radio. He produced documentaries that include The Crucified King (BBC1 2003) and American Prophet (BBC2 2008), which explore the religious dimensions of Martin Luther King Jr.'s leadership of the civil rights movement; and Who Do You Say I Am? (BBC1 2007), which features poet Michael Symmons Roberts reflecting on the contemporary meaning of the life of Christ. In addition, Dr. Russell-Jones has had the privilege of working with South African activist and Christian cleric, Dr. Desmond Tutu; Rowan Williams, former Archbishop of Canterbury; and leading Christian apologists and authors, Malcolm and Kitty Muggeridge. With the help of a team of students from Regent College he recently directed a film presented by Prof. Loren Wilkinson called Making Peace with Creation (2016).

For four years in the 1990s, he taught at Columbia Theological Seminary in Atlanta, exploring the interaction between faith, media, and contemporary culture.